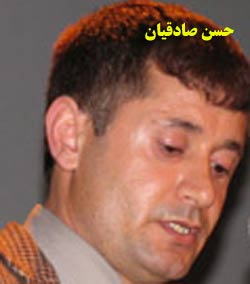 In March 2000 he entered Iraq through Turkey. He presented himself to be a prisoner who was released, but later on it became evident that he was released upon a pledge to cooperate with the regime against the Mojahedin. He entered the admission center of the NLA but before completion of his admission period he declared that he could no longer go on and asked for help to return to Iran. But despite the agreement with his requests, he ran away from the NLA base in a suspicious way on March 9, 2001 and the Mojahedin did not have any information about him since then. According to the Intelligence Ministry’s list, it was later revealed that he too went to Iran together with Mohammad Hossein Sobhani.

A prisoner by the name of Mahmoud M. wrote a letter to Mojahed publication on August 30, 2002 which gave some information about him: "Hassan Sadeqian is son of Ebrahim living in 13 Aban street presenting himself as a ‘former member of the Mojahedin Organization.’ He was one of the prisoners who repented in hall no.2 of Evin prison training center headed by Haj Mehdi, one of the perpetrators of massacre of the political prisoners in Evin and he trusted Sadeqian. After his arrest, he repented as a result of interrogations and and the way he was dealt with by Haj Saeed and Lajevardi. Since then he had been betraying people in prison and writing reports about other prisoners. When it was not possible to go out of prison without a blind, he and other mercenaries could easily go out to see all prison guards and agents of the prosecutor’s office and the Intelligence Ministry and visit interrogation branches and take part in taking files and prisoners from solitary to the interrogation branches and receive bonuses."