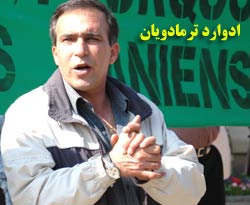 The Counter Intelligence Committee of the NCRI released a statement on August 5, 2002 on Termadoyan stating: "Termadoyan was a soldier captured in Iran-Iraq war and in 1989, according to his own request, he joined the NLA. His registration no. with the ICRC is 0685 and had been interviewed privately several times by the ICRC. He was expelled from the NLA for acts of immorality whose details in his own handwriting and signature is available. He eventually returned to Iran in February 2002.

There is a seven-page document which clearly shows that he originally intended to return personally to Iran with the help of the NLA, but he changed his mind and preferred to go through Iraqi government relevant bodies. Before leaving the Mojahedin base he thanked every single official for their efforts to provide him and his companions with their "welfare" at the exit center of the NLA and stipulated that, "you provided us with everything."

By referring to the names of 16 former POWs who returned to Iran and were included in the Intelligence Ministry’s list, the Counter Intelligence Directorate of the NLA reported on June 22 under the heading of "Scandalous fabrication of lists by mullahs’ intelligence," saying that "The return of former POWs have nothing to do with the Mojahedin."11

But after his arrival in Tehran and receiving necessary briefs, Termadoyan was sent to Switzerland by the regime. In Switzerland, a group of asylum seekers protested against their presence among Iranians and the refugees. Three Iranian refugees wrote a joint letter on this matter saying: "A number of Intelligence Ministry’s henchmen have recently entered European countries under the guise of defectors of the Mojahedin Organization. These ridiculous shows are in fact part of preparations for terrorist and sabotage acts against the Iranian Resistance. In Switzerland too, the regime has brought in Termadoyan and has applied for asylum. We, as political refugees and supporters of the Resistance have protested to the refugee commission in Bern and expressed outrage against the presence of the regime’s henchman and we hope that all refugees will protest against these refugees in their countries of residence…"