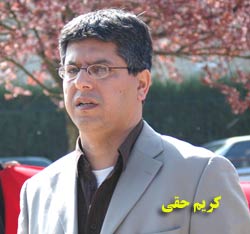 In an interview with France’s FR3 TV he introduced himself as "former head of personal protection of Maryam Rajavi and is now a political refugee in the Netherlands" and claimed that "he was a member of the People’s Mojahedin for 15 years" and as "the group diverted to sectarianism," he decided to leave the organization.

He had never been "the head of personal protection of Mrs. Rajavi" and the falsity of this claim and that "he has been a member of the Mojahedin for 15 years" can be proven in any impartial trial or investigation with ample undeniable documents and evidence. On the contrary to what he has claimed, he has never had a responsible role in the resistance movement. He was like thousands of other combatants a member of a protection guard rota for a short period of time for one of the bases of the Mojahedin in Iraq. During the bombings of Iraq in 1990, he said that for physical reasons he could no longer remain in the NLA and asked to be transferred to Baghdad to lead an ordinary life which was agreed.

In a letter his wife, Mohtaram Babai, wrote: "As you know, after the bombing of Ashraf camp, the organization transferred me (she was a combatant of the NLA), my husband and my children, upon our request, to an urban base called Jalalzadeh in central Baghdad for more protection and care. During this period, in addition to everything that the combatants received, we enjoyed special care and facilities twice as much as what was given to any other combatant. On top of all these, we were given a private apartment, a family car and received 1000 Iraqi dinars per month."

In this letter, Mohtaram Babai asked to be transferred to the United States together with her family. On the same day, that is October 28, 1992, Karim Haqi wrote a letter stating: "Before the arrangements for my family and I to go to the United States are made, Will you please take us back to Ashraf Camp for work and accommodate us in the camp, even if it meant for a six months period, in order to remove the label of defectors in face of the anti human enemy’s intentions and its surrogates abroad and traitor defector mercenaries."16

In January 1993, Haqi and his wife and children were sent to France with their expenses for the trip and stay in France paid in full by the Mojahedin Organization. Within a few months more than 67,000 French Francs were paid to him by the Mojahedin. But after a few months he decided to go to the Netherlands and apply for asylum in that country. Therefore, since May 1993 he had no contacts with the Mojahedin.

In 1994 he was bought by the Intelligence Ministry of the regime and from 1995 he was in regular contact with a person by the name of Maqsoudi at the regime’s consulate in the Netherlands. It was then that after three years leaving Iraq he suddenly ‘remembered’ that he was imprisoned and tortured by the Mojahedin during the years he was in Iraq. The Iranians residing in the Netherlands know him very well as a hated figure, especially for his corrupt and immoral relations which led to his wife’s suicide. He tried in vain, with the help of the Intelligence Ministry to make political and propaganda gains against the Resistance with his wife’s death. The state-run dailies like Kayhan and Resalat quoted Karim Haqi in December 1995 saying that his wife was tortured in the Mojahedin’s prisons and went to the Netherlands after her release from the Mojahedin’s jails and in spite of months of treatment, she eventually died. Of course, the mullahs’ SAVAK (secret police) do not explain how after three years of living with Karim Haqi in Europe, Mohtaram Babai suddenly died, as a result of ‘tortures’ by the Mojahedin, without her saying anything about it?

But what are the facts? Mohtaram Babai’s last letter which contained most of the information about the reasons of her suicide is in the possession of the Dutch police. Jamshid Tafrishi who cooperated with the Intelligence Ministry and was a family friend of Karim Haqi said: "A few days after the Iranian New Years day in 1995 I contacted Karim Haqi at home to congratulate him for the new year. Mohtaram Babai, Karim Haqi’s wife answered the phone and said he was not at home. When I asked how she was, she was choking and talked with a broken voice and said: "I came from border region in Iraq because of Karim, I personally did not want to leave the organization but in any way I was ready to come to the Netherlands for him and Maral (their daughter). But since we have arrived in the Netherlands he has turned life for me into hell. And now he has made his relations with ***… public. Believe me sometimes I decide to commit suicide to rid myself from all these shame and disgrace, and have so far gone to the brink of killing myself several times." It was a few days after this telephone call that Mohtaram hung herself from the ceiling in the bathroom of her residence."

In his revelations, Tafrishi said: "in April 1996, Karim Haqi met with Saeed Emami in Singapore and Peyvand publications was used as a cover to receive money for members of the network. After releasing the first issue of Peyvand in July 1997, Amir Hossein Taqavi (the European General Director of the Intelligence Ministry who was in charge of the general office of the special operations who directly guided the terrorist operations abroad) contacted me and asked for my views on the publication."18

The extent of cooperations and contacts between Karim Haqi and the Intelligence Ministry of the regime against Iranian dissidents in Europe was so widespread that the Police authorities in that country approached him and warned him on the continuation of such activities and contacts.19

Towards the end of 1999  the Intelligence Ministry tried by discredited stage-managing to claim that the Mojahedin had raided Haqi’s house and office in Germany and the Netherlands and ransacked them. The last time was on March 28, 1998. He made a judicial complaint against the Mojahedin in the Netherlands in Arnheim, the city he resided. But the prosecutor of the city officially announced that "he did not consider the complaint to merit punitive investigation process in the Netherlands," therefore he would refrain from pursuing the complaint.

Karim Haqi was one of the organizers of the Intelligence Ministry’s seminar on April 18, 2003 against the Mojahedin in Paris. During Mrs. Rajavi’s detention in Paris, he was involved in a coordinated campaign trying to fill the empty judicial file with false propaganda against the Mojahedin. He told the French daily La Croix: "Having Mrs. Rajavi in jail gives us hope to live in Europe!"