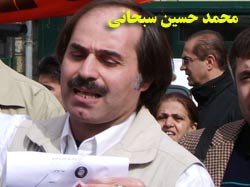 Sobhani is an Intelligence Ministry agent who was sent to Iraq to infiltrate the Mojahedin. But now that he has sought asylum in Germany and claims that he was ‘a senior member of the Mojahedin but when he criticized the strategy and ideology of the Mojahedin he was put in jail and after several years was sent to Iraqi jails and later, having served in Iraqi prisons, he was exchanged for Iraqi POWs and handed over to the Iranian regime. But he succeeded to escape from the Iranian prison and came to Europe.’

Sobhani is one of several Intelligence Ministry agents who have entered Europe within a short period in Spring of 2002 using similar scenarios as described above. Ardeshir Parhizkari, Hamireza Barhoun and Farhad Javaheri-yar are among these people.

Of course anyone who has even a little knowledge of prisons in Iran, would know very well that in the past two decades the number of political prisoners who have managed to escape has not exceeded a handful. In light of this fact, how can it be possible that within a period of two months several political prisoners, specially the ones who according to themselves have been handed over by the Mojahedin to Iraqi authorities and by Iraqis to the Iranian regime, been able to escape from the prison. This is something which no one with a sane mind would believe.

The Counter-terrorism Committee of the National Council of Resistance of Iran issued a statement at the time declaring: "Mohammad Hossein Sobhani who 3 years ago, after exposure of his relations with the regime , fled the Mojahedin bases only to be arrested by Iraqi forces and who finally made his way to Iran legally, has recently been sent to Germany by the Ministry of Intelligence. He has established relations with other agents of the MOIS and has been recommended to pretend having been a prisoner of the regime who has fled the mullahs’ tyranny by some sort of sophisticated scheme and secretly made his way to Germany!" 5

On June 11, 2002, a month and half later, the Intelligence Ministry’s Internet Site, Mahdis, hastily placed an interview with this agent to claim that although he was returned to Iran from Iraq on January 21, 2002, he escaped following a clash and a shoot out in Tehran and fled Iran to Europe in March 2002.

But what is the reality? In a report by the Directorate of the Counter Intelligence of the NLA which was published in Mojahed weekly no. 592 on July 2, 2002, we read: "Mohammad Hossein Sobhani, was a member of the mullahs’ army who was assigned in February 1983 to infiltrate into the Mojahedin in Kurdistan and then reach the Mojahedin from Kurdistan. He was first deployed in logistical bases and from February 1990 to Autumn 1991 was a member of protection team for transportation (Inside the PMOI or while still working with the regime). But due to a suspicion on his state, he never managed to gain the trust of his colleagues. Once, in 1986, his commander, Fereydoun Varmazyari raises doubts about him which lead to taking his rifle from him. In the regime’s conspiracy to assassinate of the leader of the resistance in 1992, his suspicious links and false past records and treacherous service to the Intelligence Ministry was unveiled. The news of the assassination plot against the leader of resistance was announced on March 18, 1992. Its details are as follows, on December 23, 1991 the terrorist-diplomats of the mullahs’ regime were expecting the arrival of Massoud Rajavi near the central office of the Mojahedin in Baghdad. But thr Mojahedin pre-empted and the following day the AFP and the Reuters reported that the Iranian regime announced that two of its diplomats in Baghdad have been seriously wounded by the Mojahedin. Subsequently on March 18, 1992, the regime’s radio and television hastily reported that the Intelligence Ministry had announced, ‘Rajavi was assassinated by his guards.’ Apparently the code sent to Tehran had stated ‘not assassinated’ but the mullahs’ intelligence uncoded it by mistake as ‘assassinated’.
17 days later, the regime tried to retaliate by bombing Ashraf Camp and sent 13 Phantom bombers and dropped 30 tons of bombs mainly over the command headquarters. But they failed yet again. At that time, another regime’s agent by the name of Kazem Soleimani reported that he personally saw with his own eyes the death of Fahimeh Arvani, Maryam Rajavi and Massoud Rajavi. On pursuing investigations, the Mojahedin found out more about the role of information given by the traitor defectors and infiltrators and the suspicious links between Mohammad Hossein Sobhani and his brother, Ja’afar Sobhani in ‘educational affairs’ and another Revolutionary Guard, in Evin Prison." 6

In 1999, Sobhani ran away from the NLA to cross the border into Iran, but he was arrested by Iraqi authorities and subsequently sent to Iran with a legal process in 2002. The Intelligence Ministry sent him to Europe after he was briefed again.

Two senior officials of the Intelligence Ministry by the names of Haj Gholami and Haj Saeed were responsible for their training and preparations. In a letter by another agent named Ramin Darami to "dear brother Haj Saeed" on February 20, 2002, he wrote: "After we entered Iran through legal channels, we were sent to Marmar Hotel in Tehran and were given a high level reception. While we were in Marmar Hotel, the head of our team was brother Mohammad Hossein Sobhani and others in our group were Ali Qashqavi and Taleb Jalilian. Our brothers from the Intelligence (Ministry) paid us daily visits and resolved any problems we had and during this period I spoke to Haj Mahmoud… my stay in the hotel lasted ten days…during the period we stayed in Marmar Hotel, your proposed plans were reviewed several times by brother Mohammad Hossein Sobhani within our team and briefed on that."