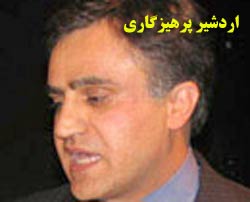 He arrived in Iraq in February 1989 from Turkey and joined the Mojahedin. He became a member of the organization in 1995. He pretended to be suffering from paralyses when he was called for security check before going to an operation. But the specialist physicians rejected his claim after carrying out tests (letter by a specialist is available). But despite this, maximum care was taken and several people looked after him. He had special interest to collect information, in particular to have access to command headquarters through suspicious communication systems. In 1998 when he felt that he is being considered as security suspect, he asked his membership to be suspended and wrote: "I would like my membership to be suspended and stripped of my organizational responsibilities and due to my physical state, I cannot have any effective military activity within the framework of the NLA and take up responsibilities." He continued living alongside the Mojahedin until he was eventually expelled in summer of 2001.

He then asked in a letter to remain for two years at the exit section of the NLA and wrote: "I do not have any other request or expectation otherwise it would mean that I am playing the regime’s card." But he later started threatening and blackmailing and when there was no doubt about him being the "regime’s card" he was expelled from the Mojahedin and went to Iran. He was later sent abroad together with Sobhani and a number of others by the Intelligence Ministry. It is interesting that Parhizkari claimed in an interview outside Iran that he has become paralyzed under torture by the Mojahedin.