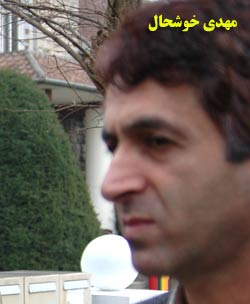 During heavy bombardments of Iraq in 1990, he announced that he was no longer able to continue with the struggle and he was transferred to Turkey and eventually to Europe in 1991. The Intelligence Ministry published two books against the Mojahedin under his name one was "Spider Trap" and the other "Mojahedin schizophrenics."

As he had a close relationship with Karim Haqi, following the exposition of his contacts with the Intelligence Ministry, Khoshhal tried to cover his connections with him by working as the editor of Peyvand. In February 2000 the German security police took him for interrogation and warned him that they were aware of his connections with the Intelligence Ministry and the salary he receives from them.