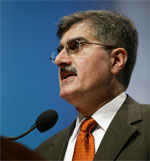 Iranian regime’s military doctrine and the options before the international community to deal with this threat.
Address by Ali Safavi, President of the Near East Policy Research in Paris Conference; "Iran after elections – Global consequences"

Since the year 2000, under the direct supervision of Supreme Leader Ayatollah Ali Khamenei, Iran’s military planners and strategists have been working on a new concept for the theocratic state’s military doctrine to take into account the new realities in the region and on the world stage. That concept is “asymmetric warfare.”

And obtaining nuclear weapons is an indispensable part of this strategy, with three important benefits:

Iran’s Two-Track Nuclear Program
The Iranian regime has organized its nuclear program in two parallel, autonomous systems – a civilian and a military program – that ultimately fall under the supervision of the Supreme Leader and a close circle of trusted advisers.

The main agency in the civilian program is the Atomic Energy Organization of Iran (AEOI). It is responsible for power plants such as the Bushehr light water reactor and the nuclear fuel cycle activities, including the mining site in Saghand, the yellow-cake producing sites in Bandar-Abbas and Ardakan, and the Uranium Conversion Facility in Isfahan.

This program is not just a cover for the military program, but also provides it with both technological expertise, a pool of experts and access to the necessary materials and equipment. For this reason, AEOI itself is under the supervision of the Supreme National Security Council

The military program is controlled by the secretive Supreme Military Committee, made up of the Chief of Staff of the Armed Forces, Maj. Gen. Hassan Firuzabadi, IRGC Commander in Chief Maj. Gen. Rahim Safavi, and Defense Minister Adm. Ali Shamkhani. All three are from the Revolutionary Guards.

It is essentially focusing on three key projects: production or procurement of enough quantities of HEU for a nuclear bomb; development of alternative enrichment techniques; work on weaponizing technology and means of delivery.

Chain of Command
All important decisions regarding the nuclear project are taken with the full participation and approval of Khamenei.

The following are the unmistakable signs of Iran’s bomb-making plans:

What’s to be done?
The election of Ahmadinejad as the new president is consistent with the Supreme Leader’s strategic decision to continue nuclear enrichment. The choice is all the more significant because in the past five years, the Iran’s nuclear program has been managed and directed by the Revolutionary Guards Corps. As a former IRGC commander, Ahmadinejad, was a perfect fit for the job.

While the deadly London bombings revived the tragic memories of Madrid, Bali, New York and Washington, DC, the question we have to ask ourselves today is which regime now poses the greatest threat to civilized society?

Traditionally speaking, seven countries have been identified as terror-sponsoring regimes. Two, Iraq and Afghanistan, have gone through regime change. Libya is trying to return to the international community. The Sudan and Syria are on the retreat. North Korea is a threat more because of its nuclear program than terror sponsorship. And the Island nation of Cuba espouses an ideology that Muslim fundamentalists would never accept.

We are left with only one country that not only considers itself as the guardian of Islam but also is hell bent on exporting its fundamentalist brand of Islam to the rest of the Muslim World. I am, of course, speaking about the theocracy that has ruled Iran for the past quarter century.

The mullahs have closed ranks because they feel the domestic and international pressure to change their ways. The only way to resist the winds of change, the Supreme Leader felt, was to have total control of all levers of power.

Against this backdrop, Europe, and particularly Britain, France and Germany, face a grave responsibility.

This is the moment of truth: either refer the mullahs’ nuclear file to the United Nations Security Council right now, or be prepared to ultimately face the world’s most active sponsor of terrorism armed with nuclear weapons.

Appeasement has clearly failed and it is time for a new approach: decisiveness. Part and parcel of this new approach is to reach out to anti-fundamentalist Muslims who have hitherto been hamstrung because of appeasement