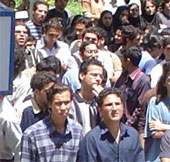 These election results as the regime’s attempt to tighten its control and to present a united, hard-line front as it sprints to develop the bomb under cover of the talks.

A rigged election, no reformist victory.
The Wall Street Journal

The most astonishing aspect of Friday’s presidential vote in Iran is not that the elections will go into a second round but that Tehran managed to convince so many in the West that this is a real demonstration of democracy. All power is held by Supreme Leader Ali Khameni, his Council of Guardians and the small clique of military officers and businessmen around him. The Council disqualified more than 1,000 candidates before the election, vetting only contestants who support the regime’s ideological lines. The example of outgoing "reformist" President Mohammad Khatami, who presided over eight years of economic decline and worsening repression, has proven that the President cannot change anything against the Council’s will.

The one number worth parsing in Friday’s election is that of voter participation. Many Iranians had called for a boycott as the only way of showing resistance. Knowing this, the mullahs seem to have taken their usual election manipulations to another level. Intimidation by the Revolutionary Guards and the fact that proof of voting is needed for certain jobs and welfare payments have always pushed up turnout. Still, voter participation has steadily declined in the past few years to barely 50%.

But this time turnout was 62.7%, exactly the level Supreme Leader Khameni had predicted. "Something is fishy here," Patrick Clawson, who follows Iran for the Washington Institute for Near East Policy, told us. Contradicting all reports about the mood in the country ahead of the vote, hard-line candidates received unprecedented support, while the main reformist candidate, Mustafa Moin, came in fifth. Mr. Moin also suggested the elections were rigged, but since the regime allows no neutral observers the real extent of fraud or Iranian discontent can’t be known.

The runoff election will now have former President Akbar Hashemi Rafsanjani facing hard-line Tehran Mayor Mahmoud Ahmadinejad, who surprised Western observers by finishing second. Neither man is a moderate in any Western sense. Mr. Rafsanjani stood by the late Ayatollah Khomeini from the first day of the Iranian revolution and was in power as Iran promoted international terror and rounded up political prisoners. He is also the father of Iran’s nuclear program and openly mused in 2001 that the Islamic world would need only one nuclear bomb to destroy Israel.

The temptation will be strong, especially in Europe, to consider Mr. Rafsanjani to be the regime’s "pragmatist" and someone who can be trusted to agree to end Iran’s uranium enrichment program in return for the right "economic incentives." But it’s more accurate to read these election results as the regime’s attempt to tighten its control and to present a united, hard-line front as it sprints to develop the bomb under cover of the talks.

Writing on these pages last week, Shirin Ebadi, the Iranian Nobel Peace laureate, warned the West against offering any concessions to the regime, urging Europe and the U.S. instead to help Iran’s democracy movement by highlighting Iran’s human rights violations. One day before the vote, President Bush finally reached out to the Iranian people:

"Today, Iran is ruled by men who suppress liberty at home and spread terror across the world. Power is in the hands of an unelected few who have retained power through an electoral process that ignores the basic requirements of democracy. .. And to the Iranian people, I say: As you stand for your own liberty, the people of America stand with you." Unfortunately, Iranians are still waiting to hear from Europe.