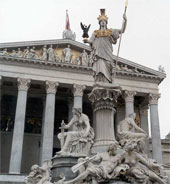 Iranian Resistance calls on Austrian government to reveal role of Ahamdinejad, other Tehran leaders in murder of dissidents

In a letter to Austria’s Interior Minister Ms. Liese Prokop, Mr. Mohammad Mohaddessin, Chairman of the Foreign Affairs Committee of the National Council of Resistance of Iran, urged him to facilitate all that is needed to investigate the role of the mullahs’ new president Mahmoud Ahmadinejad and other regime leaders in the assassination of dissidents in Vienna.

Subsequent to revelations about Ahmadinejad’s role in the Vienna killings and calls political figures in that country for a probe into these crimes, some Austrian circles have demanded a halt to any investigation. The government-run Baztab website, operated by former Revolutionary Guards Commander and Secretary to the State Expediency Council Mohsen Rezai, wrote that the investigation would have a destructive impact on signing lucrative business deals with Tehran.

Mr. Mohaddessin called on Ms. Prokop to stand firm in the face of these pressures and not allow the most basic human principles and human rights, for which millions of Europeans sacrificed their lives, to be trampled upon. He said turning a blind eye to these terrorist crimes only emboldens the regime to use terrorism as an instrument of foreign policy.

NCRI’s Foreign Affairs Committee added, “In the past 16 years, the Iranian people inside the country and Resistance’s activists and dissidents abroad have paid a heavy price for European Union’s policy of appeasement. The assassination of several dissidents in Vienna, including Dr. Abdurrahman Qassemlou, and the murder of dozens of other opponents in Switzerland, Italy, France, Turkey, Cyprus, Dubai, etc., by terrorists sent from Tehran were a direct result of the catastrophic policy of appeasement.”

In 1986, Ahmadinejad joined the Revolutionary Guards’ Special Brigade in Ramazan Garrison, headquartered in Kermanshah. The Garrison was established by the IRCG Intelligence Directorate in 1986 and was responsible for special operations and terrorist attacks in Iraq and abroad. He was recruited by then-Garrison’s commander, Brig. Gen. Mohammad Jafar Sahraroudi to take part in the assassination of Dr. Qassemlou, then-Secretary General of the Kurdistan Democratic Party of Iran. Sahraroudi led the operational team and was wounded during the attack. Austrian officials, however, returned him and his other accomplices to Tehran. Ahmadinejad led one of the two hit teams and provided the weapons and ammunitions used in the attack after receiving them from the Iranian embassy in Vienna.

In 1997, a court in Berlin cited undeniable evidence and documents to implicate the mullahs’ Supreme Leader Ali Khamenei and Akbar Hashemi Rafsanjani as principals in the assassination of dissidents outside Iran.

Secretariat of the National Council of Resistance of Iran
July 6, 2005