Election boycott was a historic no to mullahs regime, yes to democracy 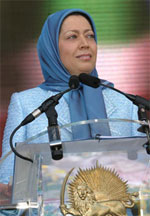 President Elect’s Statements Maryam Rajavi: Election boycott was a historic ‘no’ to mullahs’ regime, ‘yes’ to democratic change in Iran

To continue appeasing mullahs is tantamount to complicity in suppression, facilitating nuclear weapons procurement and giving free rein to export of terrorism

In a message to the Iranian people, Mrs. Maryam Rajavi congratulated them on the nationwide solid boycott of yesterday’s sham elections, saying that it amounted to a complete rejection of the clerical regime.

“An assassin and a terrorist has assumed the presidency of mullahs’ regime,” Mrs. Rajavi said. “Now, the world can clearly see that reform of the clerical state was nothing more than a catastrophic, eight-year road from religious fascism to religious fascism, which Khatami and his spin-doctors demagogically called ‘religious populism.’”
The Iranian Resistance’s President-elect said, “The ruling theocracy will emerge a much weaker and more contracted regime after this election. It will step up repression and export of terrorism. Power struggle within the regime will exacerbate; a sign that the mullahs have reached the final stages of their rule.”

Mrs. Rajavi said, “Appeasement of the clerical regime has led to the complete consolidation of power in the hands of the most extremist factions of the clerical regime. A Revolutionary Guards commander and terrorist is at the helm of the executive; a mullah-terrorist heads the judiciary, and other Revolutionary Guards and henchmen control the legislature and the state radio and television, and occupy many seats in the Majlis (Parliament).”

She called on Western governments to abandon the policy of appeasement, adding that the continuation of that policy and the terrorist label against the Iranian Resistance, a direct consequence of this policy, were tantamount to complicity in the suppression of the Iranian people, contributing to the efforts by the enemies of humanity in Iran to acquire nuclear weapons and develop weapons of mass destruction, and giving a free rein to export of terrorism and fundamentalism that would undermine peace and tranquility in the region.

Mrs. Rajavi urged the international community to refer the mullahs’ terrorism and nuclear files as well as its human rights abuses to the United Nations Security Council. The clerical regime has been condemned in fifty-one U.N. resolutions.

She added that through the boycott of the election, the Iranian nation demonstrated that it would not be satisfied with anything less than the overthrow of the religious theocracy and the realization of freedom and popular sovereignty.

“The Iranian people are resolved to bring about fundamental and democratic change. This sacred, national resolve must be respected. The impetus to realize the wish of the Iranian nation to topple religious dictatorship will rise. This was an undeniable and irreversible turning point,” the Iranian Resistance’s President-elect concluded.

Secretariat of the National Council of Resistance of Iran
June 25, 2005