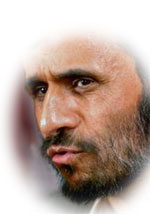 Events Born in the Garmsar, east of Tehran, the 49-year-old Ahmadinejad is the son of a blacksmith.

After finishing high school, Ahmadinejad went to Elm-o Sanaat University in 1975 to study engineering. Soon the whirlwind of Islamic revolution led by Ayatollah Ruhollah Khomeini swept him from the classroom to the mosque and he joined a generation of firebrand Islamic fundamentalists dedicated to the cause of an Islamic world revolution,

In 1979, he became the representative of Elm-o Sanaat students in the Office for Strengthening of Unity Between Universities and Theological Seminaries, which later became known as the OSU.
The OSU was set up by Ayatollah Mohammad Beheshti, who was at the time Khomeini’s top confidant. Beheshti wanted the OSU to organise Islamist students to counter the rapidly rising influence of the opposition Mojahedin-e Khalq among university students.

The OSU played a central role in the seizure of the United States embassy in Tehran in November 1979.

During the crackdown on universities in 1980, which Khomeini called the “Islamic Cultural Revolution”, Ahmadinejad and the OSU played a critical role in purging dissident lecturers and students many of whom were arrested and later executed.

In the early 1980s, Ahmadinejad worked in the “Internal Security” department of the IRGC and earned notoriety as a ruthless interrogator and torturer. According to the state-run website Baztab, allies of outgoing President Mohammad Khatami have revealed that Ahmadinejad worked for some time as an executioner in the notorious Evin Prison, where thousands of political prisoners were executed in the bloody purges of the 1980s.

In Kermanshah, Ahmadinejad became involved in the clerical regime’s terrorist operations abroad and led many “extra-territorial operations of the IRGC”. With the formation of the elite Qods (Jerusalem) Force of the IRGC, Ahmadinejad became one of its senior commanders. He was the mastermind of a series of assassinations in the Middle East and Europe, including the assassination of Iranian Kurdish leader Abdorrahman Qassemlou, who was shot dead by senior officers of the Revolutionary Guards in a Vienna flat in July 1989.