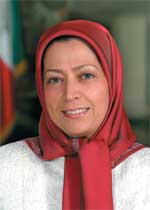 Jean-Pierre Dubois, the new head of HRL said that the signatories were primarily from France’s Val d’Oise province, north of Paris, and that they condemned the events of 17 June 2003.

That day marked a massive raid by more than 1,300 French anti-terrorist police on NCRI offices and homes of Iranian exiles in Val d’Oise, where 165 people including Mrs Rajavi were arrested on terrorism charges. All were later released, after international pressure grew on the French government for what many called a travesty of justice, though the NCRI has alleged the French security service continues to harass its activists and supporters.

The June 2003 raids were later reported to have been carried out in conjunction with the Iranian Ministry of Intelligence and Security (VEVAK), sparking a number of French human rights groups, including the anti-racist movement MRAP, to hold a series of press conferences denouncing what they termed “a dirty deal” with the Ayatollahs.

A number of French parliamentarians, human rights lawyers, and activists addressed the conference, including Socialist Senator Jean-Pierre Michel, who said, “The events of June 17 were completely political in nature for the purposes of trade deals”.

“The French Foreign Ministry continuously warns Members of Parliament to keep away from the People’s Mojahedin, yet whenever we question them to give a reason, they have nothing to say.”

The People’s Mojahedin, Iran’s main opposition group is the largest member organisation in the NCRI.

“The time has come for the French government no embarrass us no more in terms of human rights”, the Senator added.

The petition stated that the French government continues to put pressure on the Iranian Resistance to fulfill its side of the bargain with Tehran.

As an example, they signatories stated that in February, the French government barred a peaceful demonstration in Paris which was in condemnation of Iran’s human rights violation.

The statement also noted, “At a time with the mullahs threaten regional and global peace security, support for the Iranian Resistance is both inline with French values and will result in democratic change in Iran”.

The 100,000 signatories announced their support for the “Third Option” in dealing with Iran, introduced by Maryam Rajavi in a meeting in the European Parliament in December, which called for neither appeasement of the regime, nor foreign military intervention, but rather democratic change brought about by the Iranian people and their Resistance.

Articolo precedenteBush says Iran’s presidential election designed to keep rulers in power
Articolo successivoIran elections: Nothing will change until the regime is replaced