Iran Seminar in British Parliament declares; it is time for change

In light of Britain’s Presidency of the European Union and G8, and the recent sham Presidential election that took place in Iran, distinguished members of both Houses of Parliament from the three major political parties, as well as renowned jurists in Britain called on their government to take the opportunity to lead the EU away from its present policy of appeasing the Iranian regime towards a firm policy, which will include the removal of the People’s Mojahedin Organisation of Iran from the EU terrorist list. 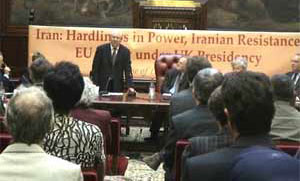 Speakers at the conference reflected on the fact that the elections were neither free nor fair, and were largely boycotted.  They further condemned what they described as the appointment of a torturer and “trained terrorist” as the President of Iran
.
The call was made in a declaration adopted by a conference held at the British Parliament on 7 July, which was sponsored by the British Committee for Iran Freedom, Bindman & Partners Solicitors, the Human Rights and Social Justice Research Institute of London Metropolitan University, Imran Khan & Partners Solicitors and 10-11 Gray’s Inn Square Barristers Chambers. 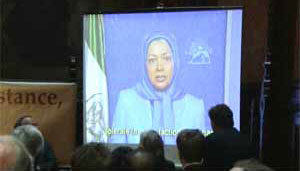 In a video recorded message to the conference, Mrs. Maryam Rajavi, President-elect of the National Council of Resistance of Iran, reiterated: “Every day that goes by, the mullahs inch closer to the nuclear bomb. It is time to stop appeasement at once. It is time to make a final choice between a theocratic state in Iran bent on continuing its destructive policies, or supporting democratic change in that country. If democratic change is the choice, then no first step would be more effective than removing the terror label against the PMOI.”

Eminent jurists in the conference also announced the formation of a committee of British Lawyers to work for the deproscription of the PMOI.  The lawyers declared that they would be pursuing every avenue, both legal and political, to achieve their aim. 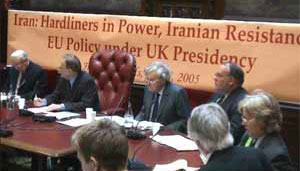